Having read the first arc of the Dray Prescot series, I had anticipated what I was in for when I started Manhounds of Antares. I expected horrendously purple prose, a first-person narrative of constant action, and a plot driven by cosmic contrivances. How accurate were my predictions?

For the first, the prose is a teeny-tiny bit better than in the Delian Cycle, but it’s still very, very, purple and overly blocky. For the second, it was pretty much exactly what I’d expected. For the third, it was somehow slightly worse than before, as Prescot is teleported around multiple times by the Plot Star Lords in ways that feel especially forced and jarring. Another returning element is Bulmer’s broad but shallow worldbuilding. consisting entirely of creating pseudo-wondrous names and species.

And yet I’ll readily admit this book served its purpose for me as a light read with a tone and prose style considerably different than the “contemporary action” books I’ve been reading. I’m just not sure I’d recommend it to others.

The quality of Kenneth Bulmer’s “Delian Cycle” of Dray Prescot novels (I got the omnibus edition) can be described in this anecdote. I dove straight through all 27 Survivalists with ease. To get through the five individually shorter Prescots took me considerably more effort. The question is…. why? I know I’ve explained my frustrations in my review of the second installment, but they deserve elaboration. After all, it’s not like I’ve had objections to reading similarly shallow cheap thrillers before.

The biggest reason is the prose, which is incredibly overwrought. It’s very hard to get through and takes away from whatever feelings the action might generate. Bulmer is seemingly never satisfied to use one paragraph to describe something when he can use three, and throw in another made-up word or ten while he’s at it. Still, if I can read Mike Lunnon-Wood, I can read him.

Then there’s the action, which labors under the horrendous prose and is just so constant that it becomes mundane. This is another reason, and it’d be a perfectly good reason. After all, cheap thrillers need to be good with action. But the action still isn’t the worst.

Another issue is the setting. The worldbuilding consists of nothing but throwing out so many names that the omnibus needs a giant glossary at the end, yet all it accomplishes is the creation of a sword and planet theme park, with the “exotic” names and airships and places being pushed so hard they lose any appeal. But it’s not like a bad setting is an absolute turn-off in a genre that depends on execution.

No, I think the biggest problem is the artificial nature of it. The books always involve Prescot getting teleported in and out by the Star Lords. To use so blatant a setup would be bad, but what makes it worse is that they’re written in a kayfabe “Prescot has narrated this on cassette tapes to Alan Burt Akers [Bulmer’s pen name]” style. What turns this from a gimmick into a flaw is that the tapes are used as get-out-of-trouble cards where-not infrequently during a dramatic moment-Bulmer will just say “and then the tapes are missing, but Prescot clearly got out of it”.

I maintain a weird curiosity for the series, but it’s not very good.

The Suns Of Scorpio 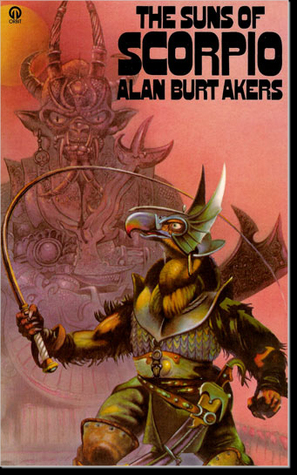 A while ago on Fuldapocalypse, I reviewed the first of Kenneth Bulmer’s Dray Prescot “sword and planet” novels, Transit to Scorpio. That was at least somewhat fun. The second novel, The Suns of Scorpio, is less fun and more pretentious. And after only one book, the novelty of the setting has definitely worn off.

The setting is about a continent wide and a millimeter deep. This wouldn’t be such a problem if it was supposed to be mundane (ie, a world with a convenient near-endless supply of mobsters for Mack Bolan to kill) but it’s intended to be “exotic” and “awe-inspiring”. What it comes across as is nothing more than a literary version of the kind of trashy sword and sandal movie you’d see on Mystery Science Theater. By trying to be more than it is, the setting turns into less than it is.

Of course, the setting and concept are all secondary to the execution in this kind of work. And here it fails even more crucially. Bulmer’s prose is ridiculous without being ridiculously fun. To call it purple would be an incredibly horrific understatement. Yet it really isn’t that exciting. It should be, but it isn’t, since Bulmer just overdoes everything. Especially the descriptions.

To top it off, The Suns of Scorpio ends on a cliffhanger that brings the artificiality of the setting to full force. I’ll just say that after reading this, I knew why the sword and planet genre declined so much in popularity.

(As an aside, with 52 entries completed before Bulmer’s death, Dray Prescot is one of those individual series that far outstrips the entire “conventional WWIII” niche in terms of quantity). 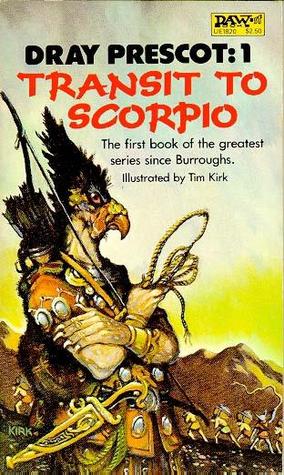 Though published close to fifty years ago, Kenneth Bulmer’s Transit to Scorpio was already almost an anachronism when it was released. Much of what we now know as “science fiction” and “fantasy” was once unified in a type of genre following in the footsteps of the legendary John Carter of Mars, one known as “sword and planet”, involving Earthmen traveling across exotic worlds and fighting with blades.

This book fits that category to a T. 18th century sailor Dray Prescot is transported to the planet Kregen around the star of Antares, where he proceeds to be rejuvenated and made near-immortal, only to be cast loose as he disobeys his masters to aid a beautiful woman, Delia. Cue a book of “planetary romance” (another name for the genre) in every definition of the term.

Transit to Scorpio has a lot of prose that’s sadly familiar even to someone like me who’s only read a bit of the style of the day, being both overwrought and clunky. It also has a plot setup that’s familiar, with almost all of the “science fiction” elements being used to set up the plot and little more. In spite of this, it’s not bad, particularly by the standards of the genre.