Joseph Rosenberger’s Death Merchant is one of the most notorious men’s adventure series of all time. Its reputation is such that I had to check it out, starting with the first volume.

The adventures of psychotic super-assassin Richard Camellion start off on a mixed note. Like the Destroyer series, the Death Merchant (for understandable business reasons) had to start off with a conventional “shoot the mobster” plot that has little in common with the crazed excesses the later books reached.

That being said, Rosenberger’s writing er, “eccentricities” are definitely on display en masse here. Long and weird descriptions of gore, over-detailed action scenes, and more, including an erratic prose style with lots of exclamation points, “grace” the pages of the book as Camellion slaughters his way through.

Rather than sink into the middle of the pack, the initial Death Merchant at least stands out due to its writing style. Whether or not it’s in a good or bad way depends on your tastes.

The third book in the Brannigan’s Blackhearts series, Enemy Unidentified takes it in a different direction. See, there’s a (then) unidentified group that has carried out one of the bloodiest terror attacks ever, and the right people to take out the perpetrators on an oil platform in the Gulf of Mexico are- John Brannigan and company. How surprising!

Now the book itself is typical action-adventure. I could sum up the basic plot with one sentence as always, that sentence being “The Blackhearts storm an oil rig.” But it’s very well done, and contains one of the best cliffhangers I’ve read. Yet this falls into the problem of stuff like this being hard to describe, even in good terms. What I find more interesting is the direction the series took, and how I felt about it.

Starting here, the books became somewhat more serialized. When I first read them, my feeling was disappointment, especially after the high of Burmese Crossfire. Now, especially having actually written an action-adventure book, I feel differently. The concept of a big-picture series has grown on me. If it can keep the author motivated, it makes the stories better than just somewhat interchangeable “51%” potboilers. 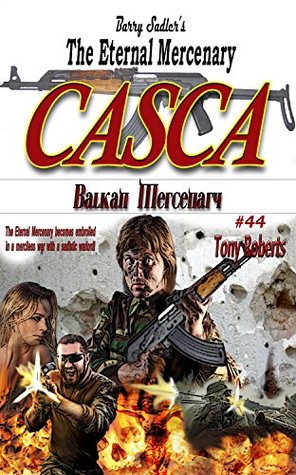 Although not the latest Casca book, Balkan Mercenary is the most recent chronologically, occurring in the beginning of the Yugoslav Wars. It’s the first book in the series I’ve reviewed that’s written by Tony Roberts, who’s the current official author of the Casca franchise.

So, I have get this out of the way first. If this had no connection to Casca at all and was just the story of a man and his team of mercs going into the Yugoslav Wars to take down a war criminal and avenge the death of his loved one, it would be a modestly decent “51% book”. There are far better books than something in the same league as Marine Force One, but there also worse ones (which is why, in spite of my complaints, I still read the Casca books).

But this is the 44th installment in a long series that I think just doesn’t work as well in more modern times as it does in the distant past. It’s even mentioned in the book itself that Casca’s aliases are getting easier to track, so I can understand why Roberts seems keener to keep Casca a historical character.

Here, every reminder that this middling action-adventure tale featured a millennia-old immortal felt blatantly shoved in. A piece on how he remembered medieval Serbia. A piece on his blood being poisonous (this was present in the early books). And a tie-in with designated recurring enemies the Brotherhood of the Lamb, who feel especially forced. Balkan Mercenary, like many other Cascas, just plods to the middle, not daring to  try and take the extraordinary premise any farther than 51% of the way.

Understandably pushed back because of the Maelstorm Rising series, Peter Nealen’s Brannigan’s Blackhearts continues with the just-released Kill Or Capture. It was well worth the wait.

Everything in this book reminded me of how great a cheap thriller this series is. Not just because the actual action is well-done (it certainly is) but because of all the touches that help it become more than the sum of its parts. There’s the opening where the protagonists are called back from their normal, everyday lives and families-something that distinguishes them from the Gold Eagle action automatons. There’s the super-conspiracy being both capable enough to pose a challenge worthy of a super-conspiracy and human enough to be fallible.

Of course, the actual plot is just a set-up for much action. I can sum it up in one sentence: The protagonists storm a fortified villa in northern Argentina. But the action is continuous, well-written, and solidly executed. The mountain terrain feels vivid and effective. The threats are varied. This is an excellent cheap thriller and worthy continuation of one of my favorite series. 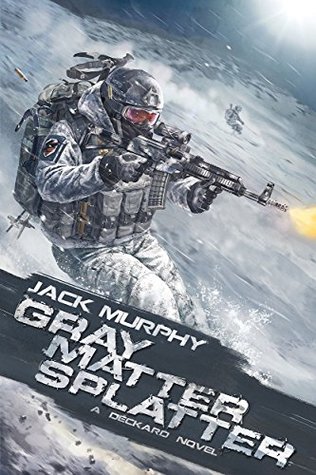 The path to opening Gray Matter Splatter was a little offbeat. I thought Jack Murphy’s debut in the Deckard series, Reflexive Fire, was wildly uneven, the kind of book that’s “Mean 51%” instead of the consistently middling “Mode 51%”. I also, similar to my experience with spacesuit commandos last winter, was getting a little worn on middling action books after reading so many of them.

So I figured, having heard that this was the craziest out of the four Deckard books, that this book with a great title was worth a shot to leap out. And so I leapfrogged over the other two and headed straight for the fourth. It was a good decision.

Now this book still has many of the problems that plagued Reflexive Fire-the political soapboxing that got in the way of the plot, the not-unusual but still irritating long descriptions of weapons, the jumpy perspectives, and the less-than-developed characters. But it’s improved to a considerable degree with the fundamentals, and the mega-conspiracy behind everything is at least tamer than the mega-conspiracy in Reflexive Fire. So there’s a little less dissonance there.

But in terms of what matters, the action is excellent and challenging as Deckard and his mercs fight their way across the entire Arctic Circle. While the sustained action may be a little more implausible than the low-level action in Reflexive Fire, I’m certainly not complaining in that sense.

A Talent For Revenge 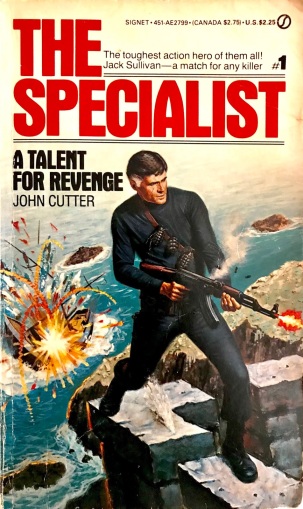 I think I may have found it. The apex. The apogee. The peak. The high point, the distillation of everything that “men’s adventure” fiction contained, all packed into A Talent For Revenge, the premier book in the “Specialist” series by “John Cutter” (a pen name of John Shirley).

By the late 80s, the genre had (with the obvious exceptions) begun to harden around the “80s, no sex, lots and lots of gun descriptions” style. The 90s commercially devastated it to such a degree that technothrillers looked untouched in comparison. When I came of age, “men’s adventure” in its purest form was down to cheap-looking Gold Eagles with awkward covers.

So I have a strange appreciation for this spectacle. If I had to show someone one book that would sum up “men’s adventure”, it would be this one.