Ok, it’s time for the next round of snippet reviews.

Trident Force is one of those mushy, mediocre 2000s cheap thrillers, not bad so much as just dull. Not much action happens, and not much else interesting happens (it’s definitely not a Melville-style “slice of military life” book-it’s meant to be a thriller). A one sentence summary is “A lethargic version of SEAL Team Seven”.

I don’t know why I keep reading thrillers from this time period, but I do. Maybe it’s the hope of finding another Tin Soldiers, or maybe it’s a weird fascination with seeing a genre at its lowest.

Merchants of War is a decent mindless popcorn mecha action novel. It’s let down by a few weird perspective shifts, but still works if you just want to see mechs explode. You have to suspend disbelief about their effectiveness, but that’s true of almost all fiction.

A middling entry in the Cody’s Army series, for the most part Belfast Blitz offers what one might expect from a second-tier 1980s action-adventure series. The “International Flashpoint” wheel landed on “Northern Ireland” for this adventure. The only standout is an incredibly telegraphed “tragic love story” between the British member of the Army and a local woman. 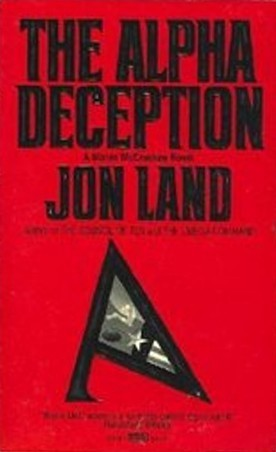 It’s not Jon Land’s fault that his first Blaine McCracken book left big shoes to fill. How does the second, The Alpha Deception, fare? In it, Blaine McCracken has another crazy adventure as he fights a rogue Soviet general with a death ray and an army of cheap thriller flunkies.

The book starts with a scene where a Hind-D helicopter is treated like it’s some kind of Airwolf-style superweapon. It only gets more ridiculous from there, from a fight with a pet panther to McCracken being subjected to a combination Dr. Evil Deathtrap and Greek mythology reenactment to a giant submarine/crab-mecha.

There’s a few stumbles with the plot. First, the ending is, well, a little Indiana Jones-y, and not in a good way. More important is the plot centered around the villain’s takeover of a small town and the resistance of its residents, which is far less interesting than McCracken’s own exploits (until, of course, they intersect). But those stumbles are very small, and The Alpha Deception maintains all the charm of the first book and then some.

I decided to take a chance on more obscure military sci-fi and Scorpion’s Fury was one of my picks. I was not disappointed.

The book tells the story of a giant scorpion-like mech dragged into action and the recruited ne’er do wells crewing it. They fight aliens in their giant mech alongside other giant mechs.

This had some of the technical boxes of the “spacesuit commando” annoyance checked. Semi-dystopian background, basic alien enemies, etc… But it was averted through two things. The first was lulls in the action that gave time to build up the characters in a badly needed way. The second was giant mechs stomping about instead of just tissue paper power armor.

This does have its share of explanations. Thankfully most of them seem very relevant and not just detail done for the sake of detail.

Besides just the sci-fi universe contrivances, the biggest I thought of was “why give misfits in relics such a prominent role.” I understood the literary reason and it wasn’t a big deal, but still.

This was definitely the highlight of the book. It takes a giant scorpion-mech stomping around and makes it (and its crew) simultaneously fun, aggressive, vulnerable, and strong.

The Only Score That Really Matters

Do the words “giant scorpion mech” appeal to you? Then you’ll like this book.