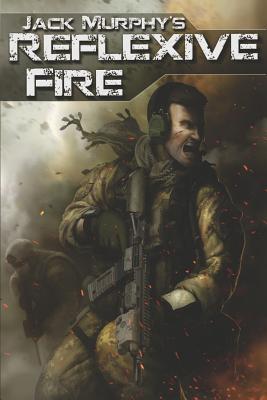 Special Forces veteran Jack Murphy’s Reflexive Fire is a very strange kind of thriller. The low-level action is very well done, gritty and gory with almost the right amount of “semi-plausibility” and “exaggeration” (I learned about Murphy’s books from Peter Nealen’s posts on them, and could see the similarities in the action immediately). The high-level plot is this huge mega-stakes mix of ancient conspiracy theories, and to say it doesn’t fit the best with the low-level action is a huge understatement. It’s like a video game with ARMA’s mechanics but Metal Gear Solid’s plot. There are Blaine McCrackens that have less ridiculous plots and MacGuffins than this.

The pacing is very jumpy, with lots of viewpoint characters (it’s a rare instance of “just a name and nationality” Steel Panthers Characterization in a small-unit action book) and a very long “Herman Melville’s Guide To Building And Training Your Dream Army With The Help Of A Super-Conspiracy” section. There’s some hamfisted politics that don’t really add anything and are ruined by the presence of the super-conspiracy.

That being said, this was Murphy’s first novel in the series, and he demonstrated enough legitimate strengths for me to be forgiving of its many weaknesses. Plus, if I have to choose between a bland middling book that doesn’t stand out from the pack or a zigzagging, “really good in one way, bad in others, and quirky to boot” book that does, I’m choosing the latter instantly.