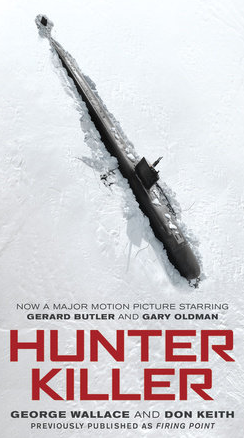 Before I start my review of Hunter-Killer (or its original title, Firing Point), the submarine thriller novel about the rogue commander of the Russian Northern Fleet and the American submarine out to stop him, I must mention that I have not seen the movie adaptation. What I’ve heard about said adaptation from other people ranges from “bad, but in an amusing way” to “bad, and not in an amusing way.” But I wouldn’t know any better.

So, for the book itself, what I got was something that was neither bad (amusing or not) nor really all that good. It was a sort of middle-of-the-road technothriller (this is not an insult) that was too bulky for its own good (there’s a big plotline barely related to the submarine stuff about Russian mobsters manipulating the stock market that only exists as a form of additional ‘crisis overload’) but still managed to avoid the clunkiness of say, a later Tom Clancy book.

The submarine action itself? Passable. The SEAL action? Passable. The characters? Ehh, a little less than passable. The book was published in 2012, but feels incredibly 1990s in its depiction of Russia, some of its technology, and its overall tone. That’s one of the few really interesting things about it, and it wouldn’t surprise me if it turned out that some of the drafts were written in that decade. Other than that, Hunter Killer/Firing Point is just a humdrum popcorn technothriller that unfortunately embraces length for length’s own sake. There’s a lot worse out there, but there’s also a lot better.