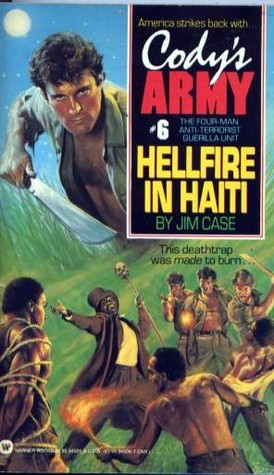 If I had to pick a favorite entry in the seven-book Cody’s Army series, Hellfire In Haiti would easily win. Nothing else has the same mix of action, fun, and good villains. I never had as much entertainment out of a Cody’s Army book as I did here.

The entire Cody’s Army series feels to me like the action adventure novel version one of those knockoff fighting games that tried to piggyback on the Street Fighter and Mortal Kombat-not bad , but the incredibly obvious influence is still there, and it could only have existed in the middle of a very big pack. Still, none of the Cody’s Army books are unreadable, and this one in particular is a highlight of the entire genre.

Army member Rufe Murphy is kidnapped and subjected to a voodoo ritual, adding to the over-the-topness of this book. The villains in this book are excellent action-adventure fodder. There’s main villain Clairvius Bourreau  the ex-death squad leader and drug lord who enjoys dressing in showy outfits. And there’s his American ally Wes Taggart, a psychotic former Vietnam unit-mate of protagonist John Cody. That brought a smile to my face as Taggart reminded me of some of the sort of dubious “hard man who breaks the rules” “protagonists” of more recent war-fantasy novel.

And the final battle featuring the Army vs. Bourreau’s stronghold stands as the literary version of Arnold Schwarzenegger’s Commando. It’s easily one of the best climaxes I’ve read in an 80s action-adventure book. Cheap thrillers, especially ones of the time, don’t get much better than this.