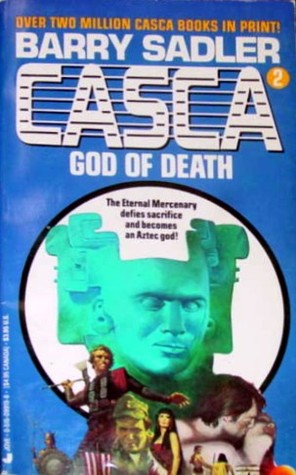 So I figure I should mention the best Casca book in my eyes. That would be the second, God of Death. By some accounts in the confusing internet tangle of rumor and whisper surrounding the series, it’s the last book Sadler personally wrote. I have no knowledge or evidence for any of this being true or not, but figure I should mention it.

In the book itself, Casca sails with the Vikings and ends up in pre-Colombian Central America. Then he gets his heart cut out-and puts it back in what should have been the defining scene of the series. Cue many of the Casca staples. The doomed romance, the “exotic” historical eras, and the lack of strict accuracy.

What makes this Casca stand out is that it actually runs with the supernatural qualities and the immortality gimmick in a way that many of the later ones simply don’t. It could be that the series was still fresh and new, or it could be that the vagueness of this time and place gave Casca more breathing room than a more documented one where he ultimately has to stick to history. Whatever it is, God Of Death is one of the few books where Casca’s premise lives up to its potential.