The final Casca book credited to Barry Sadler (regardless of its actual authorship-according to some stories I’ve heard, it was a manuscript found after his death), The Mongol is a 51% book in a 51% series. The “which period of history should we put Casca in a theme park version of” wheel stopped at “Genghis Khan” this time.

The good news is that compared to previous flops like The Trench Soldier and The Samurai, this book is significantly better. The bad news is that, like every other Casca book, it’s still melodramatic pulp historical fiction that does almost nothing with its supernatural premise. For a quick read, one could do a lot worse. Yet there isn’t really anything to recommend it ahead of the first two Cascas either.

Thus it’s perhaps fitting that a middling series ended (for a time) on such a middling note.

This is the 250th post on Fuldapocalypse. I could write about the undeniable fear living a hundred miles from a pandemic epicenter. I could write about how the blog has been one of the few high points during an unsatisfying life ridden with mental health issues even before the crisis,

But instead, since there’s enough gloom out there already, I’m going to write about a bad Casca book. And The Trench Soldier is very bad. And unlike The Samurai, which had Casca just plopped inside an essentially unrelated adventure, this has him front and center. It’s bad in a criticize-able way. While trying to find the true authorship of the Sadler-fronted Cascas is essentially impossible, the talk has been that he did not personally write this. Whoever did, well, they failed-but failed amusingly.

The Casca Formula I saw after just a few books is in rigid force here. Take a historical period-World War I, in this case. Plop Casca in it and subject him to the most stereotypical pop culture set pieces of that era, from charges into machine guns to poison gas. Have him meet the appropriate historical figures, in this case Immelman and a young Herman Goering. Utterly fail to explore any element of his character, or I should say any potential element of his character, because his character doesn’t really exist or stay consistent at all.

What makes The Trench Soldier special is that it goes above and beyond the usual. Events that took place throughout the war are stuffed into a few months in 1914. There’s a ridiculous scene where Casca battles a Zeppelin. If the whole series was full of this over-the-top craziness, I’d think a lot more highly of it. Sadly, it’s not. The historical inaccuracy can be summed up by him defending the Maginot Line at Verdun in 1914.

It’s not a good book, and it’s rare that even a bad example in a series puts every single one of its flaws in the forefront. But this is what The Trench Soldier does. It somehow manages to take all the Casca weaknesses and amplify them while keeping the very small number of strengths. And that’s strangely impressive.

So I figure I should mention the best Casca book in my eyes. That would be the second, God of Death. By some accounts in the confusing internet tangle of rumor and whisper surrounding the series, it’s the last book Sadler personally wrote. I have no knowledge or evidence for any of this being true or not, but figure I should mention it.

In the book itself, Casca sails with the Vikings and ends up in pre-Colombian Central America. Then he gets his heart cut out-and puts it back in what should have been the defining scene of the series. Cue many of the Casca staples. The doomed romance, the “exotic” historical eras, and the lack of strict accuracy.

What makes this Casca stand out is that it actually runs with the supernatural qualities and the immortality gimmick in a way that many of the later ones simply don’t. It could be that the series was still fresh and new, or it could be that the vagueness of this time and place gave Casca more breathing room than a more documented one where he ultimately has to stick to history. Whatever it is, God Of Death is one of the few books where Casca’s premise lives up to its potential. 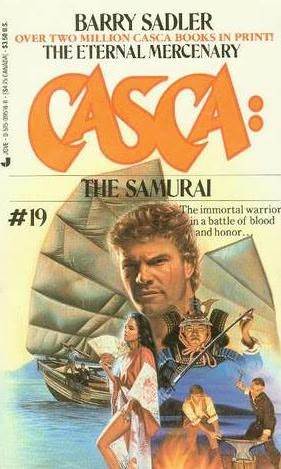 With the nineteenth entry in the series, The Samurai, Casca swings and misses dramatically like a called-up minor leaguer facing Nolan Ryan. Of all the Casca books I’ve read, this is the worst of them (so far). I’ve heard conflicting answers as to who was actually writing the later Casca books before Sadler’s death, but whoever was did not succeed here.

Knowing the history of the series, I was expecting a clumsy, stereotypical depiction of ancient Japan. And I got it. But it also has very blocky, clunky prose and flat fight scenes that take away the biggest strength of the Casca series-the ability to have effective action despite its protagonist being, you know, immortal.

Not that it really matters much, because here Casca himself might as well just be a second-rate hired gun in a dull story about dull rivals fighting for power in dull battles. Having all the weaknesses of the Casca books but none of the strengths, The Samurai is something I wouldn’t recommend even to fans of the series.

The Casca series takes its path to the Arab-Israeli wars hinted at in the first book. Soldier of Gideon is a “modern” Casca, as opposed to the ancient Cascas. Taking place in the Six Day War, it’s typical of later Cascas-formulaic but good.

The action-packed book is in this kind of particular subgenre of war story that’s more gory and grisly than a John Wayne-style sanitized work, but still far more over the top and spectacular than a truly grounded novel. This isn’t a bad thing, but it’s interesting.

(Sidenote: For whatever reason, historical war fiction isn’t usually my cup of tea. I’ve read good examples, but it just doesn’t grab me the way action-adventure or even technothrillers do. That being said, I have read enough to tell which slot Soldier of Gideon fell into)

The Arab armies seem to use primarily western equipment (to the extent that only Jordan did in the historical war)  with a few IS-3 tanks thrown in as challenging encounters. Casca and friends go to every theater of the war. In the process, Sadler demonstrated both his greatest strength and greatest weakness as the series dragged on.

The greatest strength is managing to maintain dramatic tension and fluid excitement in a story that features A: A historically decisive blowout victory, and B: An immortal protagonist. This is no easy task, and it’s a sign of Sadler’s proficiency that Casca never devolves into the “unironic One Punch Man” that it could have.

However, the other side of the coin is the almost complete lack of interest in using the immortal protagonist who’s lived for thousands of years, met every important Eurasian historical figure in that time, and is linked personally to Christianity as anything but a placeholder to build period pieces around. While cheap thrillers like these aren’t philosophical works, the wasted potential is still very high.

That said, as cheap thrillers, the Casca books still work, and work well. 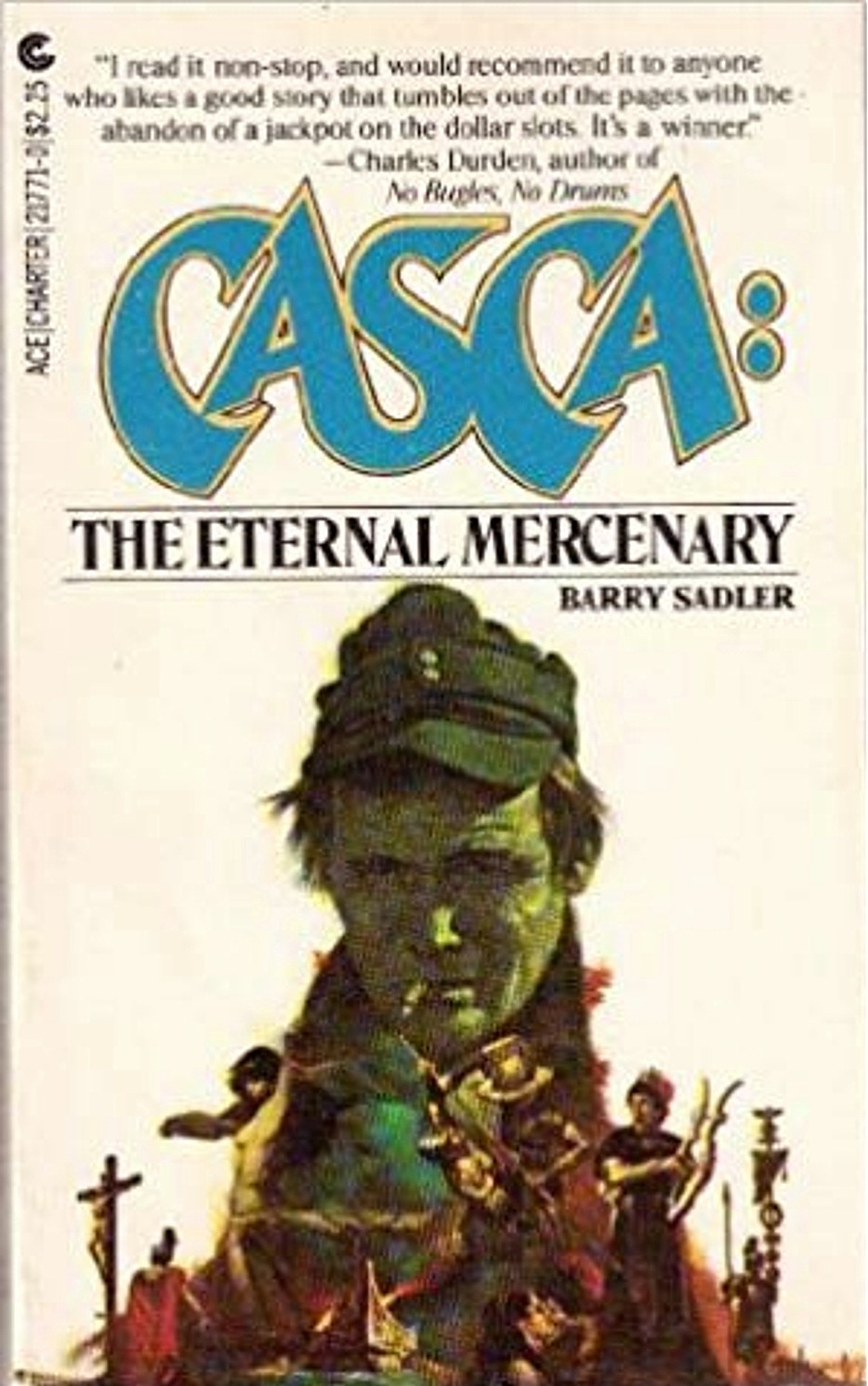 So the Casca series is a little off the Fuldapocalyptic beaten track for me. But really, I of all people couldn’t resist a series written by Barry Sadler of ‘Ballad of the Green Beret’ fame with the premise of “The Roman soldier that stabbed Jesus with the spear is fated to be a soldier/warrior forever”, fusing the Longinus and Wandering Jew mythologies. That part brings a very different song to my mind.

The first book opens in Vietnam where the main character heals ridiculously fast from a seemingly fatal head wound, and one “hypnotic narrative” later, returns to nearly two thousand years in the past. After the event, he gets in a fight with his “sergeant” over a girl and ends up with a deep wound… …which heals, because in practice, he turns into essentially Marvel’s Wolverine without claws. Cue a long stretch of time where he fights throughout dynasties of Roman history, then a final scene in the then-present where Casca/Casey has escaped from his Vietnam hospital-and is fighting in the Arab-Israeli wars.

This is very much a pop-historical “sword and sandal epic” rather than trying for any serious attempt at realism, and is all the better for it. Casca becomes a slave, he becomes a gladiator, and he enjoys a bit of peace before returning to his horror.

One of the low points of the book is its cultural er- insensitivity. While an action novel in the 70s is not going to top anyone’s “most progressive” list, this has a few moments that made me raise eyebrows. The walking stereotype Chinese martial arts master (yes, in ancient Rome, it’s a long story) who teaches Casca I was more bemused by than anything else. I went ‘uhh….’ at both the vicious savage African gladiator whose victims included (of course) a young blonde woman and the man whose marriage improved after he started hitting his wife.

But even the worst I found tolerable, because it only felt offensive and not offensive and creepy. This is, after all, a 70s action novel. And what it does well, it does very well. The Eternal Mercenary can make its action dramatic even with an immortal protagonist, and that’s no small feat.