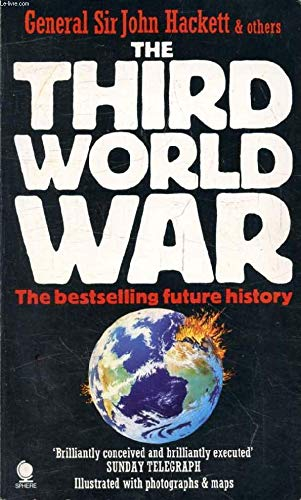 John Hackett’s Third World War was, even more than Red Storm Rising, the book that started off the subgenre this blog was founded on. Thus I figured making it my first review of 2020 was an appropriate milestone.

This is incredibly hard to review. I was initially very dismissive of this book when I read it. And in an isolated “spherical cow” sense, I still feel that way.

Compared to Team Yankee, Red Army, Chieftains, and even RSR itself, it offers very little in terms of literary quality. It’s dated (there’s a reference to Abrams as “XM1s”, which is kind of like calling T-64s “Object 432s”). It’s a mixture of straight “pseudo-history” and clunky, sometimes dubiously written vignettes, all stuffed together awkardly. It has, with the Birmingham-Minsk “trade”, one of the worst examples of plotnukes ever. The whole thing is a political lobbying document in the shape of a novel.

And yet, this is perhaps the most context-affected book I’ve ever read. To someone like me who treated the Heavy OPFOR Tactical as casual reading and has seen many, many primary sources, it’s not novel in any way. To someone of that time period, especially someone who wasn’t an analyst, it definitely would be. The nature of this book makes its novelty even more essential than normal, due to its shortcomings.

Hackett’s Third World War has a few interesting scenes, like the chapter detailing how the general public saw the war. It deserves credit for being the first out of the gate. While I originally thought that it was a bad influence on later books of its type, a more thorough reading of the “big war thriller” subgrene reveals that it really wasn’t.

That being said, to a modern audience, it’s still really nothing more than an even more dated version of The War That Never Was, with all the baggage you might expect from it. It’s a very important historical piece and is worth a read for that alone, but it hasn’t aged well.