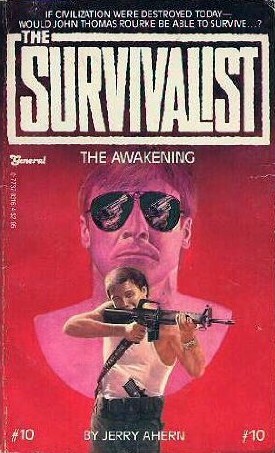 The tenth Survivalist book, The Awakening is when the series changes significantly. Having spent centuries in suspended animation to ride out a world-consuming fire wave underground, the Rourkes now emerge to take stock of the changes and aid the space-launched Eden Project as it prepares to return. John Rourke ages his children by selectively thawing and refreezing them so that they can be the same age as the adults when they wake up, and they emerge into a world where human life still exists.

This book, if I had to reedit/adapt the Survivalist series, probably wouldn’t even exist at all. I’d probably fold the recovery and the Eden Project return into an epilogue to Book 9 at worst and a few extra chapters at best, and then conclude the series there. But in actual history, the books were selling enough to continue and Ahern finally had the ability to make them more and more science fiction-y.

While the Survivalist series was never a “hard” setting to begin with (after all, the nuclear war caused multiple states to tumble into the ocean), here begins an even more contrived setup. There was an underground shelter. And another underground shelter. And another underground city. And an underwater city! It’s very much like a Bethesda Fallout game where there’s a lot of conveniently working stuff laying around centuries after the war, and it becomes a more obvious author’s toy with each new book after this.

(Later there will be a second timeskip that will obliterate the last traces of any post-apocalyptic residue in the setting, but that’s another story)

The actual book itself is more satisfactory Jerry Ahern action, but this is still the time when the series jumped the shark.