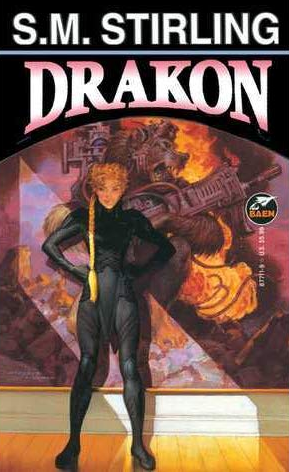 The fourth book in the Draka series, Drakon is the story of the Draka utterly triumphant, having bioengineered humanity into master and servant subspecies-in one universe, with only the descendants of those who escaped the “Final War” to stand against them. Too bad homo drakenis Gwendolyn Ingolfsson got sucked through a wormhole experiment into the then-present. She plots to take over the world for the Draka, with only a strange cast of people from multiple universes to stop her.

This isn’t really alternate history, even in the most fleeting sense. It’s pure cheesy science fiction, a “fight the Terminator-Predator-Amazon” story. Drakon is as sleazy as it’s cheesy, with Stirling never missing a chance to throw in a lurid detail. And while it works as a turn-your-brain-off “51% book”, there are some legitimate and serious flaws.

First, it doesn’t have, say, Jon Land’s sense of buildup. Too much is revealed too fast, and the residual baggage of the alternate history background burdens it even more. Second, the conclusion is an utter clunker. That is to say, it’s a simultaneously confusing and rushed mess of escalation that ends with a contrivance and ridiculously obvious setup for a sequel that understandably never came. Third, the only interesting character is Ingolfsson herself, and even she could be done a lot better.

Take away the fandom controversy and the legitimately distinct (however dubious) alternate history that made up the first three installments, and all you have is, as I’ve said before, tawdry fiction that, while not unreadable or unenjoyable, wouldn’t really stand out.