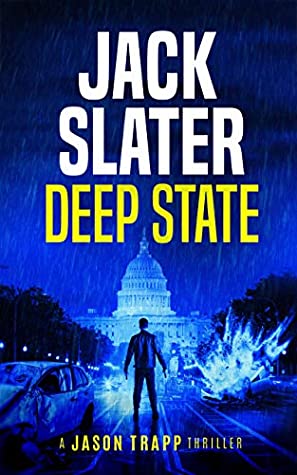 Jack Slater’s debut, Deep State , is a very zig-zaggy book. It features super-operative Jason Trapp (another action hero name for you) as he foils the same kind of “attempted American coup” plot that has been going on in cheap thrillers since Seven Days in May. Despite its title, it’s not really that political, which was a pleasant surprise.

This book has one of my cheap thriller pet peeves front and center-when the writer repeatedly goes “this isn’t like the movies” but then has the characters do ridiculous stuff anyway. This is why the book goes up and down so much. It wants to go “THIS IS SERIOUS AND NOT MOVIE-LIKE” but then has Trapp doing incredible things. It also has a few extraneous characters, a villain contrivance so powerful it needs a heroic contrivance to compensate, and manages to hit a few too many genre notes (although that could just be me having read waaaaaaaay too many of these kinds of books).

In spite of all this, the fundamentals are good enough (barring the “this isn’t like the movies, he just does incredible things in an un-cinematic way” dissonance) and it flows well enough to make all of that forgivable. This is still worth a read.