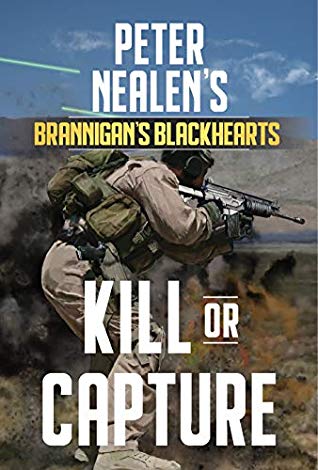 Understandably pushed back because of the Maelstorm Rising series, Peter Nealen’s Brannigan’s Blackhearts continues with the just-released Kill Or Capture. It was well worth the wait.

Everything in this book reminded me of how great a cheap thriller this series is. Not just because the actual action is well-done (it certainly is) but because of all the touches that help it become more than the sum of its parts. There’s the opening where the protagonists are called back from their normal, everyday lives and families-something that distinguishes them from the Gold Eagle action automatons. There’s the super-conspiracy being both capable enough to pose a challenge worthy of a super-conspiracy and human enough to be fallible.

Of course, the actual plot is just a set-up for much action. I can sum it up in one sentence: The protagonists storm a fortified villa in northern Argentina. But the action is continuous, well-written, and solidly executed. The mountain terrain feels vivid and effective. The threats are varied. This is an excellent cheap thriller and worthy continuation of one of my favorite series.