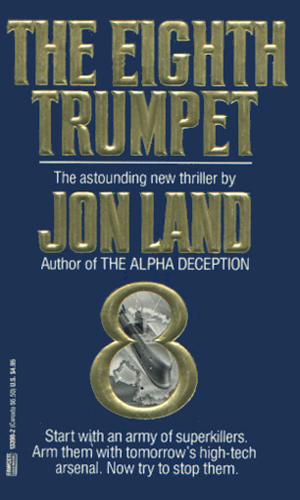 Fresh off the first Blaine McCrackens, Jon Land introduced fellow super-agent Jared Kimberlain for a similar absolutely bonkers thriller. The Eighth Trumpet not only has offbeat fight scenes, it also has a plot centered around an, uh-Jerry Ahern-ian grasp of geography. By this point the formula has solidified, especially with the Hulking Strong Sidekick Protagonist who fights the dedicated Hulking Strong Antagonist hand to hand during the climax.

That being said, it manages to out-McCracken even some of Land’s other books with how ridiculous-and fun- some of the set pieces are. It’s not that much different “plot”-wise from many of Land’s other books (at least to someone like me who has actually read a ton of them), but it definitely has a huge spark of “WOAH!” in it, making it very worthwhile.